The Elephant font was designed by Matthew Carter.  I like this font since to me it has all the heaviness and bearing as the animal for which it was named.
I also, with much glee, found out there is, and this is really cool, a typography museum. http://abc.planet-typography.com/

“May you soar on eagle wings, high above the madness of the world.”: – Jonathan Lockwood Huie

Eagles are a large bird of prey found in myth around the world. The eagle is found on all continents except for Antarctica. For most the eagle is a symbol of power and strength.   Not for all though – see the aborigine version.

“Celebrate your success and stand strong when adversity hits, for when the storm clouds come in, the eagles soar while the small birds take cover” – Napoleon Hill.

The USA is not the only country that uses the eagle as a symbol.

Many countries use the eagles of various types on their coat of arms including Albania, Armenia, Austria, the Czech Republic, Egypt, Germany, Ghana, Iceland, Indonesia, Iraq, Mexico, Moldova, Montenegro, Navarre, Nigeria, Palestine, Panama, Philippines, Poland, Romania, Serbia, Syria, Yemen, and Zambia. The Great Seal of the United States is, of course, an eagle.

(And…deep breath)
The eagle has also been used by Egypt’s Ptolemaic pharaohs, Napoleon I, the Persian Empire, Charlemagne, Byzantine Empire, Ottoman’s Turks and many more. They were also used on the standards for the Roman legions. That’s it for the book report section.

“Eagles don’t flock, you have to find them one at a time” – H. Ross Perot 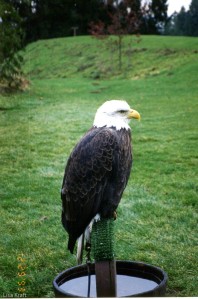 Now on to the myth.

It is an eagle who carries the Sumerian king Etana to the heavens to look for the tree of life. http://codex99.com/typography/1.html Where else to find better information than typography?

In Vedic mythology, the eagle is Garuda (half-man, half-eagle), the serpent-swallower. He is the king of the birds and the destroyer of snakes.

In Norse mythology Thiassi, the storm-bringer, often takes the form of an eagle. Thiassi is a frost-giant who convinced Loki to steal the Apples of Immortality (Odin told Loki to put the apples back).

The patron animal of the Greek god Zeus is an eagle.The Ganymede myth is one of the best known wherein Zeus took the form of an eagle to abduct Ganymede. http://www.pantheon.org/articles/g/ganymede.html

A gigantic eagle was set by Zeus to feed on the ever-regenerating liver of Prometheus after he was chained to the peak of Mount Kaukasos as punishment for stealing fire from the gods.
http://www.theoi.com/Ther/AetosKaukasios.html

And Jupiter (the Roman equivalent of Zeus) believed that the Eagle could look directly into the sun.

I love the fact that among the Australian Aborigines the eagle is not the symbol of strength, but a type of bogey-man used to threaten children into good behavior.

Finally, in astrology the eagle is the highest aspect of the sign Scorpio.

Take this as a little motivation to unfurl your eagle wings and fly as high as you can.  We can all catch the thermals and fly above the crowds (clouds) if we try.

” You cannot fly like an eagle with the wings of a wren. “– William Henry Hudson.

And for those of you who can’t wait for the next blog installment of eagles and myth here are some great sites to visit.
http://socyberty.com/folklore/eagle-in-myths-mythology-and-folklores/
http://symboldictionary.net/?p=2446
http://wdfw.wa.gov/wildwatch/eagle_game/eagle_myths.htm
http://www.mythencyclopedia.com/Be-Ca/Birds-in-Mythology.html
http://www.baldeagleinfo.com/eagle/eagle-myths.html
http://symboldictionary.net/?p=2446