A few of my favorite things: hummingbirds buzzing around my head, a bald eagle perched in a nearby tree and rainbows everywhere I look. That’s what The Hill looks like as it meanders through the space/time continuum. 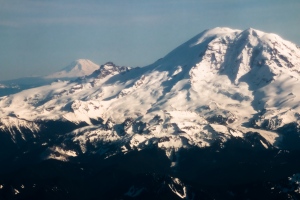 Where I live is definitely one of my favorite things. Beyond my little cottage on top of the hill is the city of Seattle, snow-capped mountains (both east and west), volcanoes, beaches, forests, lakes and inlets. Any direction I go takes me to a completely different place. There are so many rich adventures to be found that I will never manage to find all of them.

I have help with one of my favorite organizations. The Mountaineers https://www.mountaineers.org/

The Mountaineers were founded in 1906 by an almost equal number of both men and women. From the website: “The Mountaineers is an outdoor education nonprofit of 11,000 active members offering you ways to get outside and get connected to a community passionate about the outdoors.” 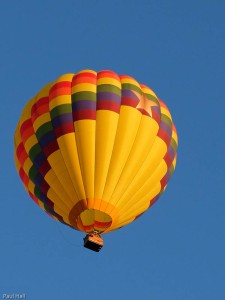 There’s more to living here than hiking, kayaking, and beachcombing. There’s a rich history from the native tribes and an inspiring collection of diverse mythologies.

Where I live, I can go berry picking in the morning, take a ferry for ice cream in the afternoon and be back in time for the ballet in the evening.

Or I can go kayaking in the morning and then hike The Olympic Rainforest before going to a late afternoon at one of the many area museums. 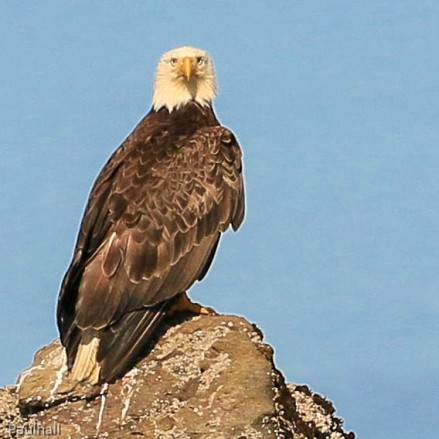 Before my fellows in the Pacific Northwest rise in anger about my not keeping all of this secret, let me say: “Oh, yes. It rains here constantly. It’s gray and you really shouldn’t move here.”

Actually forget that. There are many paradises scattered around the world. Let me know what yours are and why. My next favorite thing is traveling. Where should I go?

Many thanks to kiwinana for nominating me for the Liebster Award. You should check out her blog @ http://ramblingsofawriter2016.com/

For those of you who are wondering, the rabbit is Kala. She and her brother, Merlin, have since moved on to a rabbit-centric home where they get far more attention, but somehow they still sneak into the pictures. The Bengals liked them well enough, but I found myself overstretched.

Today several places in the Northern Hemisphere have the longest hours of sunlight of the year. This however can be taken to the extreme. On Summer Solstice, the North Pole gets 24 hours of daylight. Talk about sleep deprivation.

I have visiting Stonehenge during a summer solstice on my list of things to do. Not this year, but hopefully soon.

For luck, make sure you turn around three times clockwise after waking up on the morning of the Summer Solstice. 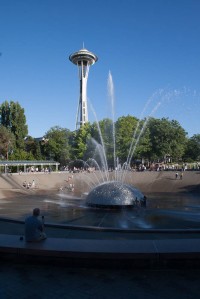 The fair features the Seattle Art Car Blow-Out with over 75 “art” cars decked out in every manner of decoration. There’s a dog parade, solstice-inspired yoga, buskers of every conceivable type (chalk artists, musicians, jugglers etc.) and then there is the 2014 Solstice Parade.

The Solstice parade has marching bands, floats and all the usual cast of characters. It also has the famous or infamous (depending on how you look at it) Solstice Cyclists.

This is according to Wikipedia and I can say for a fact that this information is accurate:

“The Painted Cyclists have long been a fixture of the Fremont Solstice Parade – an event created and produced by the Fremont Arts Council. The parade is a fantastic and whimsical celebration of the return of the sun, complete with larger than life puppets, floats, and street performers.

The Painted Cyclists engage and entertain the crowd with our boldness, bareness and enthusiasm. Join us as we welcome summer to Seattle with an outpouring of artistic expression, fossil-fuel-free travel, and fun.”

However you decide to celebrate the solstice, I wish you fun and adventure.

Some fun FAQs I found for the Solstice Cyclists participants

Do I have to ride naked? Of course not, some cyclists chose to wear a little something. Try flesh colored undies for the ladies and speedos for the guys.

How long does it take to be painted? Depending upon the complexity of your design, painting can take from 45 minutes to 4 hours. If your design consists of a base coat with detail on top, you’ll need to leave time for the base to dry plus time for the whole thing to dry before we ride.

Will the paint come off? Eventually. Your best bet is lots of warm, soapy water, a washcloth, and a friend to scrub between your shoulder blades. Most paints come off in little flakes so I recommend using a hair snare in your drain to prevent them from mucking up your plumbing. In 2004, I discovered the miracle of “pressure washing”. I attached a spray nozzle to my garden hose, stood in the middle of my yard and turned the water on, adjusting the nozzle until the water was a concentrated jet. This essentially peeled the paint right off my body. Combined with some sea salt and Dr. Bronner’s and I was clean in a record 30 minutes! It’s probably not a bad idea to stand in a kiddie pool or on a tarp to keep the paint flakes out of your lawn. Last year, I experimented with dry scrubbing first. I used an old, rough washcloth to gently abrade the paint off and then lathered up and rinsed. Like a charm!

I’m a little, um, hirsute. Will my body hair affect my paint? You can definitely be painted over body hair although it can be a bit trickier to get an even coat. Body hair also makes removing the paint more difficult and more painful. Some folks get into the hair removal aspect while others chose to go au naturel. It’s up to you.

Mount St. Helens was in the news again on May 1, 2014 with a new build-up of magma. The USGS says it is an impending “long-term uplift” coinciding with some increased seismic activity. Despite recently making the news, this is just what the volcano routinely does.

This is the anniversary of the devastating eruption of Mt. St. Helens on May 18, 1980, the deadliest volcanic event in the history of the United States.

Mt. St. Helens is the most active volcano in the Cascade Range Volcanic Arc which is a segment of the Pacific Ring of Fire. It is a stratovolcano (also known as a composite volcano with steep-sided mostly symmetrical cones.

Fifty-seven people died and the animal loss was estimated at 7000 big game animals, 12 million salmon in hatcheries and more small animals than could be estimated.

The eruption column reached 80,000 feet in less than 15 minutes, spread across the US in 3 days and it circled the globe within 15 days.

The blast itself released 24 mega tons of thermal energy. The temperature of the lateral blast was at least 660 degrees and traveling at 300 miles per hour.

The Klickitat have one of the most famous of the Native American legends of the mountain. In this story, often called the “Bridge of the Gods” the chief of all gods had two sons named Pahto who became Mt. Adams and Wy-east who became Mt. Hood. They fought over the beautiful maiden (once an old crone) named Loowit, Mt. St. Helens.

This story in all its beautiful detail with the various endings of the different tribes is told masterfully at http://oaltomlinson.blogspot.com/2008/05/klickitat-legend.html 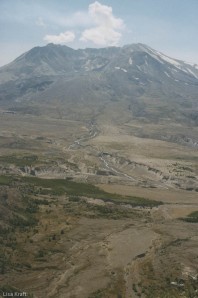 On May 18, 1980, what was once a tranquil recreational mountain teeming with wildlife and graced by the beautiful Spirit Lake exploded into the volcano that is known today. Thick ash clouds, mudslides miles long and nine hours of “vigorous” ash emission ended a 123 year slumber. The area is still recovering.

We have five major Washington State Volcanoes. Besides Mt. St. Helens, there are Mt. Rainier, Mt. Baker, Glacier Peak, and Mt. Adams. These five make up one quarter of the active volcanoes in the lower 48.

For a good map of the location of each volcano in Washington State and an accompanying picture go to: http://www.washingtonstatesearch.com/Washington_maps/Major_Washington_State_Volcanoes.html

For the sake of brevity, I’ll only cover the big five. Since Mt. St. Helens gets its own post on the anniversary of its last eruption (May 18), that leaves four volcanoes for today.

The volcano I see most frequently is Mt. Rainier. Mt. Rainier is part of the Seattle area landscape and is the largest mountain and volcano in Washington State. Mt. Rainier has 26 main glaciers and snowpack all year which makes it an ideal training ground for scaling Mt. Everest.

Mt. Rainier is also a national park and several of the most popular activities at the mountain
include skiing, cross-country skiing, hiking, photography and camping. May it never explode.

Native Americans called the “Big Mountain” by several names (including Takhoma, Tahoma etc) and besides “Big Mountain” most of the names mean such things as “Snowy Peak” and “The place where water begins”. Much more descriptive and appropriate than being named for explorer George Vancouver’s friend, Rear Admiral Peter Rainier.

Mt. Baker (Koma Kulshan) is the northern most volcano in Washington State. It is the third highest mountain in the state. Mt. Baker is considered one of the snowiest places in the world. http://volcanoes.usgs.gov/volcanoes/baker/

Mt. Adams, named after President Adams by Hall J. Kelley (once he finally figured out which volcano he could name), is located east of Mt. St. Helens, and, outside of Mt. Shasta in California, is the largest by volume volcano in the Cascade Mountain Range http://volcanoes.usgs.gov/volcanoes/adams/
Native American local myth about Washington State http://www.crystalinks.com/volcanomyth.html 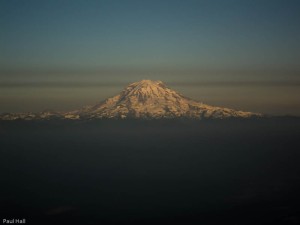 The constant question on everyone’s mind after the Mt. St. Helen’s blast is which volcano is most likely to erupt next? http://blog.seattlepi.com/thebigblog/2010/01/08/which-state-volcano-is-most-likely-to-erupt-next/

The Burke Museum located on the campus of the University of Washington is one of the best go-to-places for all things Washington State including volcanoes. http://www.burkemuseum.org/

All of Washington’s volcanoes except for Mt. Adams have erupted during the last 250 years. For a complete list of time and type of eruptions go to: http://www.dnr.wa.gov/ResearchScience/Topics/GeologicHazardsMapping/Pages/volcanoes.aspx

Wingdings render letters as a variety of symbols. Microsoft 1990. Overall just a great deal of fun.

An area, usually of a flowing river where water drops abruptly and nearly vertically. As strange as it is to me, I have met people who have never seen a waterfall.

Some beautiful images of waterfalls: http://www.bing.com/images/search?q=waterfalls&qpvt=waterfalls&FORM=IGRE

The highest waterfall in the world is Angel Falls in Venezuela and the largest waterfall, calculated by the volume of water passing over it, is Khone Falls in Laos.

Overall there are ten different classes of waterfalls based on the volume of water flow and height. At the top are class 10 waterfalls such as Khone Falls and Niagara Falls.

I am most fortunate to live in a state with a multitude of waterfalls of all sorts of different classes and types. 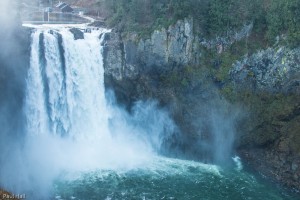 From Aasgard Falls in Chelan County to Zig Zag Falls in Skamania County or ZigZag Falls in Pierce County, this website is a fantastic guide of places to visit and waterfalls to see in Washington State.
http://www.waterfallsnorthwest.com/nws/database-state.php?find=Washington

According to this site “the state possesses perhaps the highest density of waterfalls in the entire nation” and then follows up with 67 pages of waterfall listings.

Snoqualmie Falls is great favorite and only a very short drive away from Seattle. http://www.snoqualmiefalls.com/. Snoqualmie is an easy access (wheelchair accessible) large waterfall with a straight-down plunge of 270 feet. It is well worth the view. 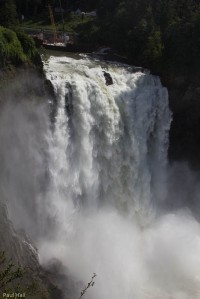 Finally here is my list of many of the waterfalls I have yet to see, but many of them are on my bucket list. http://www.worldwaterfalldatabase.com/

What waterfall would you most like to see and why?