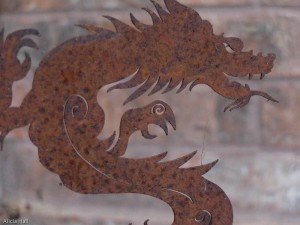 Do you know anyone with wings under their armpits? Do you know any old crones or beautiful young women who are always followed by inclement weather?

All Bulgarian dragons are successful shape-shifters.

The Zmeys are especially known for falling in love with and seducing humans. Which means they’ve spent a lot of time in human form.

Zmeys are usually male and associated mostly with fire. There are records of a few Zmeyitsas (female) protector dragons and some accounts of the Zmey having an affinity for both fire and water. Most villages in Bulgaria have their own Zmey as protector. The Zmey battle the elements for the safety of crops and village. Mostly they battle against the Lamia, the female water dragons.

Another form of the Zmey is described as part snake, part bird and part human. No one can give an exact description because they can become invisible at will. Their battles with the Lamia often cause thunderstorms and lightning.

It is said if you eat the heart of a Zmey you can partake of their power. Considering how dangerous these dragons are, well, I think most sane people would give that a second thought.

Bulgarian female dragons, the Lamia (Lamya) & Khala (Hala) are powerful water creatures with little love for mankind and his settlements. The Lamia can stop the flow of water in a well or stream, or dry up lakes and cause drought. She can also create storms and pummel the fields with hail.

If your Zmey isn’t strong enough to defeat her then a sacrifice to her might ease her temper. I have not found any documentation yet that the Lamia has the power of invisibility like her male counterpart, but I certainly wouldn’t put it past her.

Zmey and Lamia, male and female, fire and water, are locked in endless battle. I imagine that little dragons must come from somewhere so the conflict might be a little over-hyped.

Personally. I think powerful female figures can be intimidating in some cultures. In a more enlightened time perhaps there are reformed Lamia wandering among us and equally liberated Zmey who are no longer constrained by the notions of the past.

There is far more Bulgarian myth than I can share in a year. The richness of the tales and culture are staggering and well-worth exploring.

I leave you with another Bulgarian saying

In my opinion one of the best sites for an overall accounting of Bulgarian Mythology. http://www.spellintime.fsnet.co.uk/Folklore_Section_Background.htm

1. As small as walnuts, they sit in a low place, but they reach to the sky.

2. What is the sweetest and the bitterest thing in the world?

3. A world without people Cities without houses Forests without trees And seas without water.